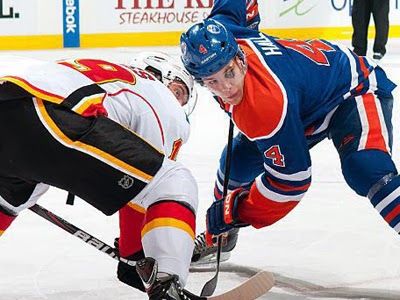 While the most glaring hole on the Edmonton Oilers current roster is unquestionably their backend, the need for another top flight centre and changing the overall mix of their top six forwards isn’t that far behind.

There are those who tend to put far too much stock into the type of players the Oilers employ in their bottom six, when in reality it is the lack of consistency from the top two lines that is the far greater concern.

General manager Craig MacTavish is hoping he can acquire a couple of bigger bodied forwards to employ on his first two units prior to the start of the 2014-15 campaign but those players don’t exactly grow on trees in today's NHL.

Add to that the fact he would prefer one of those two to play down the middle of the rink and suddenly the search becomes that much tougher.

The way things are currently situated in Oilerville, the chances of Sam Gagner and possibly one of Jordan Eberle or Nail Yakupov not being around next season are fairly strong possibilities. While the likelihood of MacT shipping #14 out of town are slim and none, if someone were to knock his socks off with an offer he couldn’t refuse, which I simply cannot see happening, that could very well change.

If the plan is to add a legitimately impactful player to the blueline and bona fide top two centre with some size, the Oilers GM may need to completely overhaul the look of his current roster. With that said, Mr. MacTavish should have one other option at his disposal…revisiting the idea of using Taylor Hall down the middle.

While I have always had no issue with the notion of eventually using the Oilers #4 at centre, attempting to try it out during this season’s training camp and to start the year was a terrible miscalculation on the part of the organization and one that ultimately blew up in their face.

When you combine the fact Taylor was coming off what was easily his finest NHL season to date, Ryan Nugent-Hopkins was set to start the year on the sideline recovering from shoulder surgery and Hall himself was roughly eighteen months removed from recovering from a similar procedure, all signs were pointing to now not being the time to make the switch. Of course, that didn’t stop them from trying and the kid looked completely out of sorts and struggled mightily.

One would think if you are planning on making such a move, you might inform the player in the off-season so he could prepare. Instead, the Oilers told him to practice taking some face-offs because they might try him out at centre during camp. Last time I checked, there was a whole lot more to playing centre in the National Hockey League than taking draws.

Not surprisingly, he was in over his head right from the start and thankfully the experiment ended after only a handful of games. Hopefully that experience hasn’t soured him on the idea because moving him to centre could make his general manager’s life far easier moving forward.

There is no question management has been toying with the idea of using the former Windsor Spitfires standout at centre since they selected him first overall back in 2010. Which is all well and good but after watching his first two seasons come to premature endings due to injury, especially with the second being his shoulder, the idea of using him at centre should have been placed on the back burner for at least a couple of years.

To their credit, the Oilers did not force him into playing down the middle during the NHL Lockout, as many had suggested they should have done, as that was not the right thing to do at that time. They were rewarded for their patience with Hall looking like an entirely different player in year number three. Unfortunately, that performance coupled with circumstance being what they were, rushed the club into making the mistake they did back in September.

At the end of the current season, Hall will have two seasons under his built since going under knife to repair his shoulder and an entire off season staring him in the face to prepare for making the shift. While he may not be the biggest fan of playing centre, I’m guessing he is even less a fan of continually losing hockey games.

Next year will be his fifth year in the league. He will be turning twenty-three in mid-November and hasn’t come close to getting a sniff of experiencing post-season play. At some point, it has to become less about the individual and more about the team. We always hear Eberle, Hall and Nugent-Hopkins go on how it’s not about how many points they put on the board but rather winning hockey games. I think everyone can agree that the time to start doing exactly that has clearly arrived.

In four short years Taylor Hall has managed to turn himself into one of the most productive wingers in all of hockey. He has not only put up 109 points over his last 102 games but has improved his overall game along the way. However the time has come for the future captain of this team to do that little extra to help improve this club and that little extra would entail him embracing the aforementioned switch from the outset and see how he does.
Posted by Oil Drop at 7:15:00 am