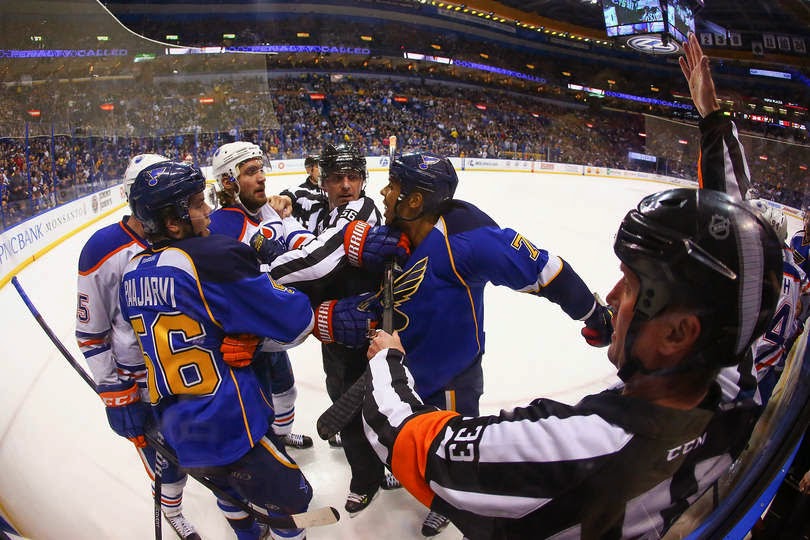 No one could or even should have been surprised by the fact the Edmonton Oilers were trounced 6-2 by the St, Louis Blues on Thursday night. While the Oilers continue to battle for last place in the entire National Hockey League, the Blues currently sit atop the league with an impressive 97 points in just 66 games. Pretty predictable wouldn’t you say?


Dallas Eakins’ crew may have played the league leaders to a standstill over the opening forty minutes of play, thanks in large part to a couple of lucky bounces, they were absolutely destroyed over the final twenty minutes of action. St. Louis took it to another level in period three and there was quite literally nothing the Oilers could do about it.

Netminder Ben Scrivens looked shaky from the drop of the puck, allowing six goals on thirty-seven shots and more importantly, four goals in just over twelve minutes in the third period. While the twenty-seven year old continues to be peppered on a nightly basis, pucks that had been finding ways to hit the Oilers #30s have suddenly started to find their way into the back of the net.

Welcome back to planet earth Ben…we all knew it was just a matter of time.

The line of Jordan Eberle, Ryan Nugent-Hopkins and Nail Yakupov were god awful from start to finish, as the trio combined to go -11 against a Blues squad that simply overpowered and outworked them every time they hit the ice. While Yakupov continued to add to his league worst plus/minus rating of-33 with his third dash four performance on the season, Eberle matched him stride for stride on this night.

The Oilers #14 has produced just two goals and five points over his last eleven games and saw what was by far and away his lowest on ice total of the season against St. Louis, playing just over twelve minutes. The power play continued to be as ineffective as it has been over the last number of weeks, going zero for three on the night and being out chanced one more time by the opposing team’s penalty killing unit.

From an individual standpoint, the one player who stood out above the rest was David Perron and frankly…it wasn’t even close. The former St. Louis Blue was his usual feisty self and managed to score the game’s first goal in his return to The Show Me State.  Unfortunately, the likes of Andrew Ference and Mark Fraser were unable to match their teammate’s compete level, as both blueliners were outmuscled far too easily behind their own net, which led directly to a pair of goals against.

Adding insult to injury was the club’s lack of response to a trio of Blues going after Taylor Hall, mere seconds after the Oilers best player slid the puck into Ryan Miller following an offside call. While no one could blame any of Ken Hitchcock’s players for their reaction to the play, the fact no one in Orange and Blue came to their teammate’s defence was more than a little troubling.

While there is no shame in losing to the best team in the National Hockey League, the fact the Edmonton Oilers came out with the third period that they did has to be more than a little disappointing. Outside of an all-world 43 save performance from Nikolai Khabibulin during last season’s 3-0 win over the Blues, this team has ran the Oilers show for some time now.

Edmonton had the opportunity to go out and send a message with strong final twenty minutes on Thursday evening and were clearly not up to the challenge. Shocking? Not at all. Disheartening? Most certainly. Let’s see what team decides to show up in Detroit on Friday night against a Red Wings squad that has been decimated by injury.
Posted by Oil Drop at 7:04:00 pm