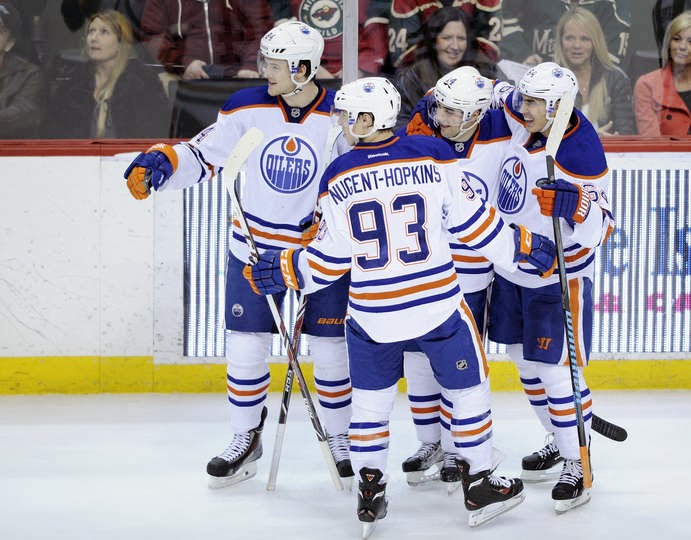 On a night In which the Edmonton Oilers fell behind early and in a building they lucky to even get a point out of, Dallas Eakins’ crew found a way to come all the way back and earn a 4-3 shootout victory over the Minnesota Wild on Tuesday evening.

Despite a rather bumpy opening twenty minutes to his Oilers career, goaltender Viktor Fasth was rock solid in his debut, stopping twenty-eight of the thirty-one shots fired his way, in earning his first victory since October 16th against the Calgary Flames.

The former Anaheim Ducks netminder wasn’t tested nearly as often as Ben Scrivens was on Sunday night against the Los Angeles Kings but he did manage to make a number of timely stops throughout the full sixty minutes and ultimately gave his team a chance to find their game and earn two points they looked to have no chance of getting.

To their credit, the Oilers bounced back with a fairly solid final thirty minutes after being thoroughly outplayed and outworked over the opening period and a half. That said, if not for a major blunder from rookie goalie Darcy Kuemper that led directly to Jordan Eberle’s third period equalizer, this one would have likely never reached an extra session.

Kuemper’s bobbling of Andrew Ference’s long ranged shot turned out to be the bounce Edmonton needed after watching their netminder and penalty kill stand tall and their power play coming up empty one more time. The fact this team continues to be as ineffective as it is on the man advantage is an absolute head scratcher and a major concern moving forward.

Defenceamn Oscar Klefbom made his long awaited and much anticipated debut on Tuesday night in the very building in which he was drafted by the Oilers at the 2011 NHL Entry Draft. The youngster was paired with Ference for much of the evening and after some hiccups in his first handful of shifts, the big Swede settled down and didn’t look the least bit out of place.

The twenty-two year old ended up playing just over fifteen minutes and picked the first point of his career on the game tying goal. While Klefbom did struggle at times with the speed of the game, he did show the ability to quickly find and open teammate and hit him with a solid first pass out of the defensive zone…which is something Edmonton’s blueline desperately lacks.

In all honesty, it was a fairly impressive debut for both Fasth and Klefbom and one that was made that much better courtesy of the Oilers sharp-shooters in the shootout. Eberle improved to a league best 5-for-5 with the opener, which was immediately followed by another nifty finish from David Perron, who pulled the visitors within one midway through the third.

After watching Sam Gagner miss on his attempt and Fasth stop both Matt Moulson and Jason Pomenville, the Oilers Taylor Hall would put this one to bed, sliding one between the wickets on Kuemper and into the back of the Wild net for the win.

It was far from a textbook performance but the Edmonton Oilers are in no position to be grading wins and especially not when it comes against a playoff team and in Minnesota to boot. Count your lucky stars and move on to St. Louis...god knows that one won’t be easy.
Posted by Oil Drop at 9:14:00 am